The Magic of Coachella Weekend 2 on 35mm Film

I have been dreaming about going to Coachella for years and last weekend it actually happened. Not to be dramatic or anything but Coachella cleansed my soul.

I was hell-bent on camping because I wanted the “full Coachella experience” but it ended up being a difficult task because my friend and I live in Vancouver. I found someone on Reddit from the Bay area and we ended up camping together… when we finally made it to car camping that is. Due to high winds, car camping was delayed until Friday at 3 am. This meant that our original plan of landing in Palm Springs at 8:30 pm and heading to our already set up campsite was not going to be the reality. The reality was attempting to sleep on the airport floor for a couple hours before our camping buddy picked us up. After being picked up at 3 am, we made our way to the car camping lineup which was a complete shit show of people not knowing what to do. We made it into Lot 4 at 7 am. I loved being in Lot 4. It was in a great location, close to Lot 8, and close to the festival. Walking around the lot and seeing people’s set ups was one of my favorite parts of car camping. Not to mention the convenience of being able to come back and switch your shoes when you’re an idiot like me and don’t wear worn-in boots and need to go back to camp to switch shoes because your feet are bleeding.

For my first Coachella I definitely took every minute into consideration. I ended up seeing 18 full sets and 10 split sets for a total of 28 sets. I am pretty impressed with myself.

Friday was electric for me. I saw full sets of Gingee, Elohim, PVRIS, Bleachers, The War On Drugs, and The Weeknd and half sets of St. Vincent and Alison Wonderland. I had my “Coachella Moment” during Bleachers’ set when they sang ‘I Wanna Get Better’ and I realized that my dream was actually a reality and I was dancing with a bunch of random people and having the time of my life. My worst set conflict was deciding on going to The War On Drugs, The Blaze, or Black Coffee. In the end, I decided on The War On Drugs and I’m so happy I did because they were absolutely incredible. For months I was hoping that The Weeknd would perform ‘The Morning.’ He did and I died a little inside from pure happiness.

Saturday wasn’t as stacked as Friday for me but it was still a busy day. I saw full sets of Ron Gallo, Big Thief, MØ, Tash Sultana, HAIM, and Beyoncé and split sets of Marian Hill, BØRNS, BROCKHAMPTON, and Blackbear. Saturday was full of dancing and being able to witness the first woman of color headline Coachella and kill it was something I will never forget. Beyonce is a god.

The Coachella blues began to set in on Sunday because I knew the end was near. I saw full sets of LP, Snail Mail, Cardi B, Portugal. The Man, ODESZA, and Eminem and split sets of Hannah Wants, Japanese Breakfast, Vance Joy, and FIDLAR. There was lots of running around on Sunday trying to time setlists so I could hear the songs I wanted to hear live. Portugal. The Man as a sunset slot could not have been any better and ODESZA completely blew my mind; by far the best visual set I have seen. After ODESZA it really hit me that it was the last day and I cried before Eminem went on because everyone was just so happy and at peace and I didn’t want it to end. I ended Sunday night dancing at the silent disco until 4 am.

I spent a lot of time reflecting on my weekend on Monday when I was waiting for my flight. I just want to make people feel as happy as I felt at Coachella. If I can do that, I will be succeeding.  I’m hoping I absorbed enough energy to tide me over until next year but until then, I’ll be counting down the days until Coachella 2019.

The good thing about being delayed for car camping was being able to catch the wicked sunrise on Friday morning. I absolutely loved the convenience of camping and I will definitely be doing it again next year. Lot 4 ftw. 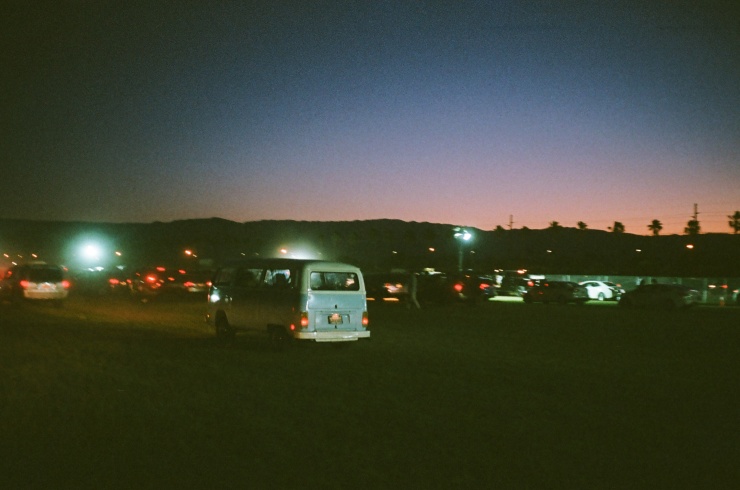 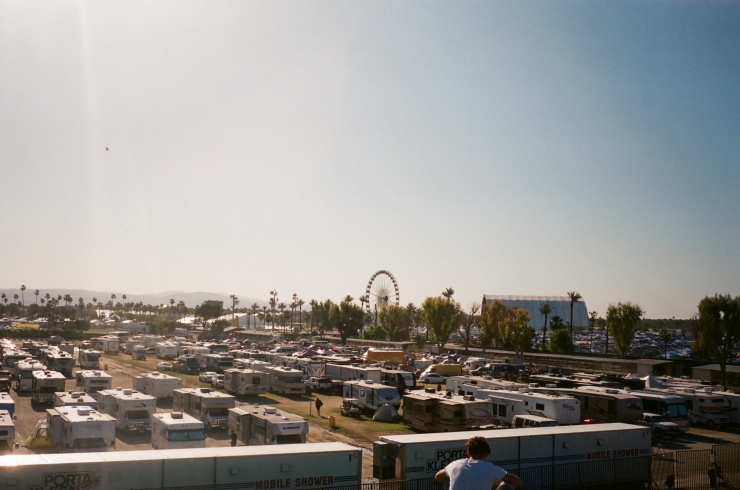 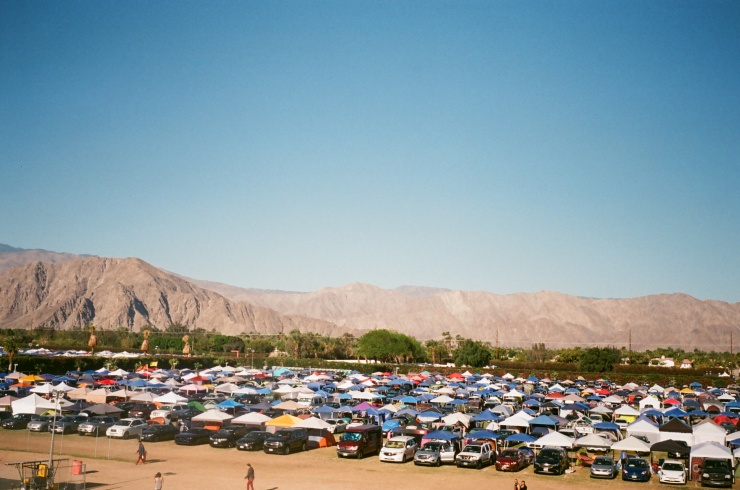 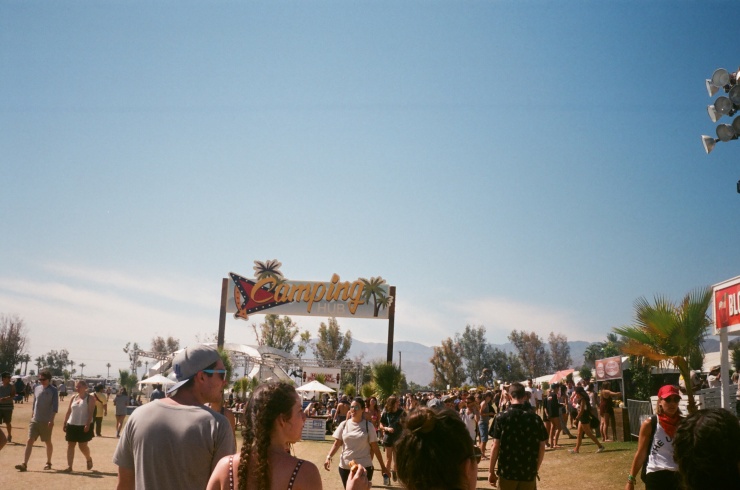 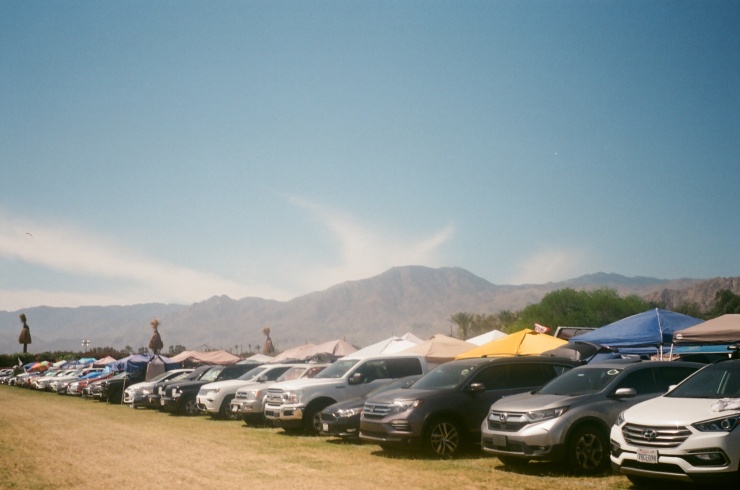 We went to the festival at 11 every morning. I loved running into the grounds and seeing it so empty. Going when the gates opened also meant that I could get my cookie dough caramel vegan ice-cream the second I wanted it because there wouldn’t be a line. The Sahara tent is also so peaceful in the morning, it’s crazy to think that something so empty can get so packed as the day goes on. 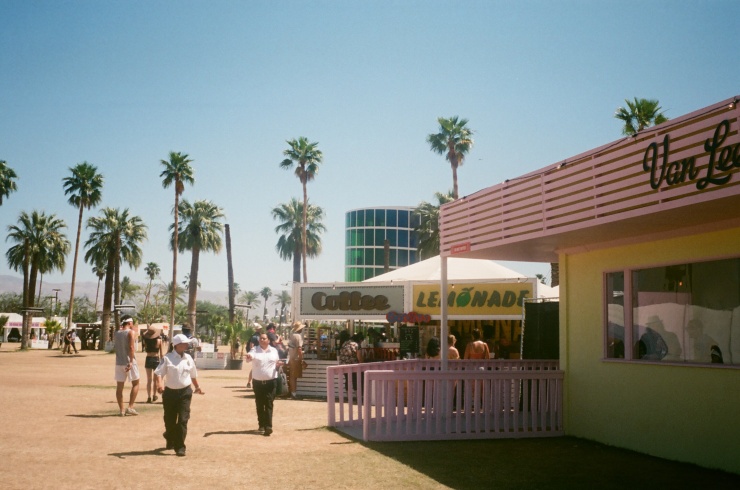 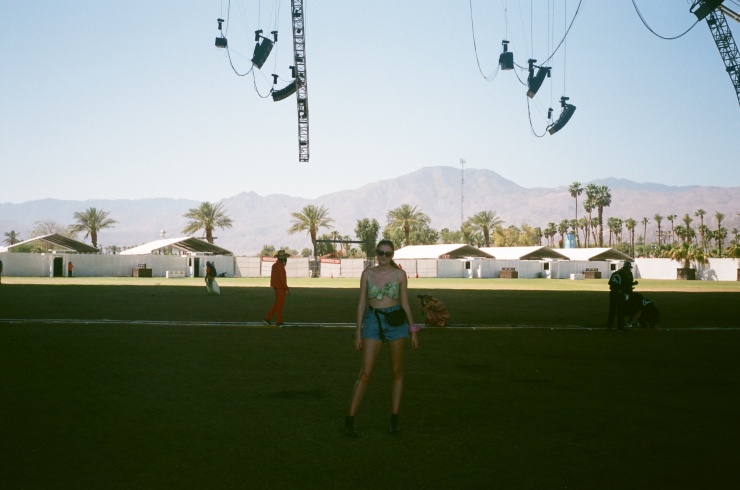 As the temperatures increased, so did the number of people at the festival. We spent a few hours each afternoon in the Sonora because of the air conditioning. Although the afternoons were hot, they felt so electric. 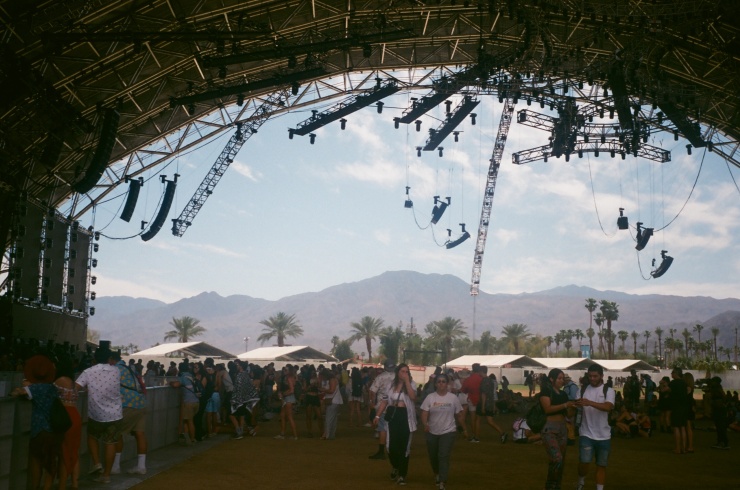 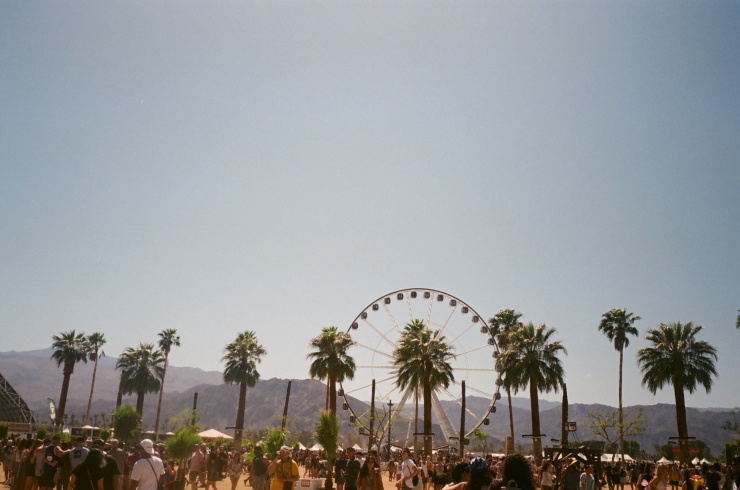 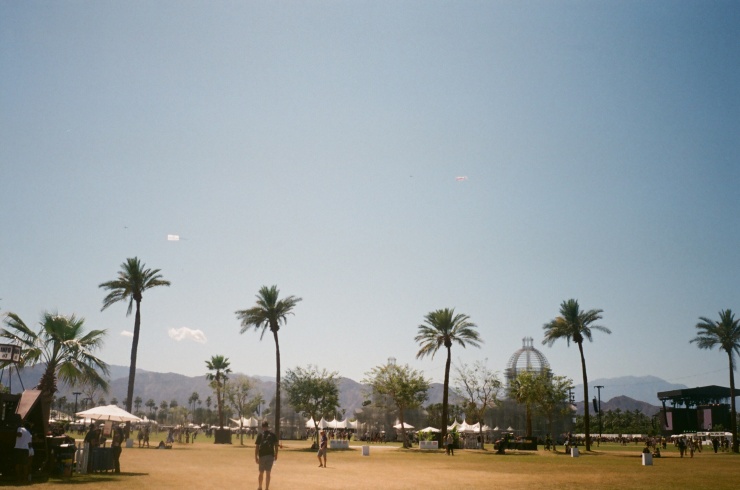 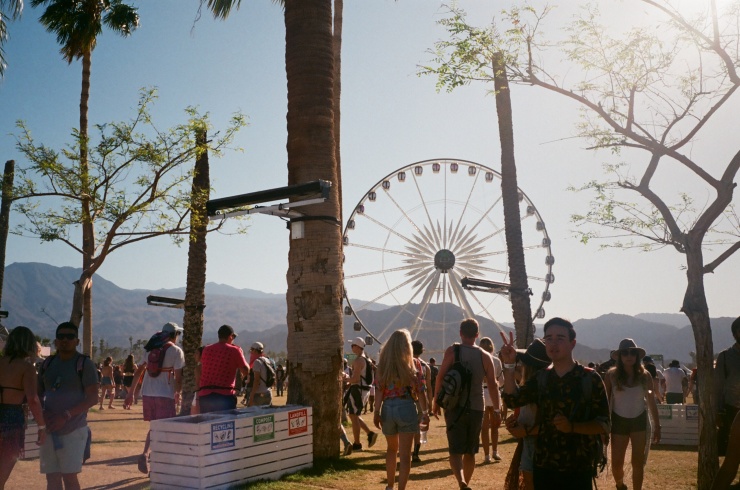 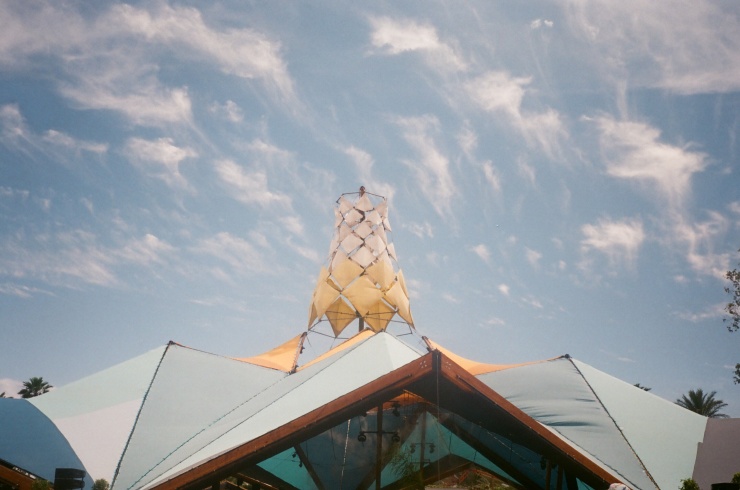 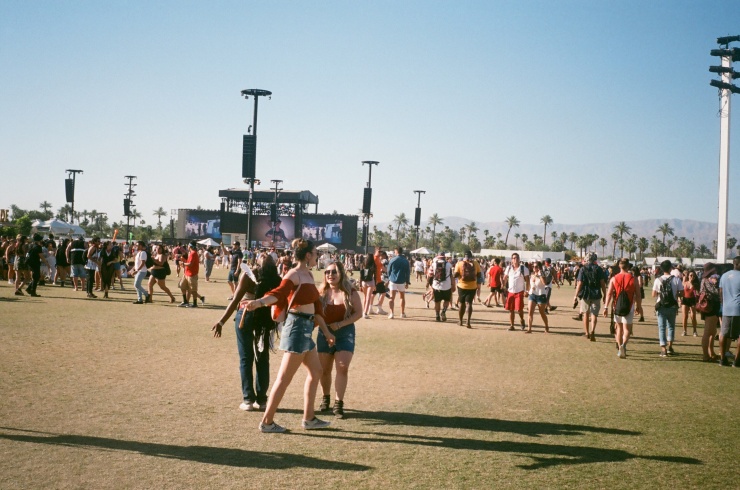 Golden hour was my favorite time of day. I got to see the most incredible cotton candy colored sky as the sun went down on Saturday. It was so beautiful. 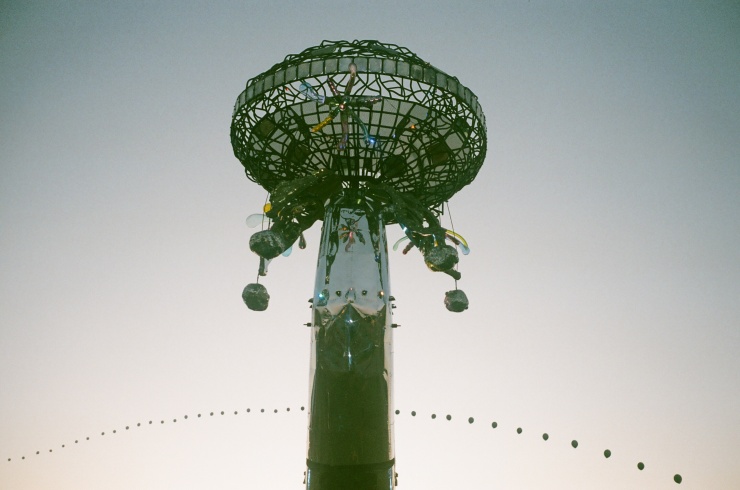 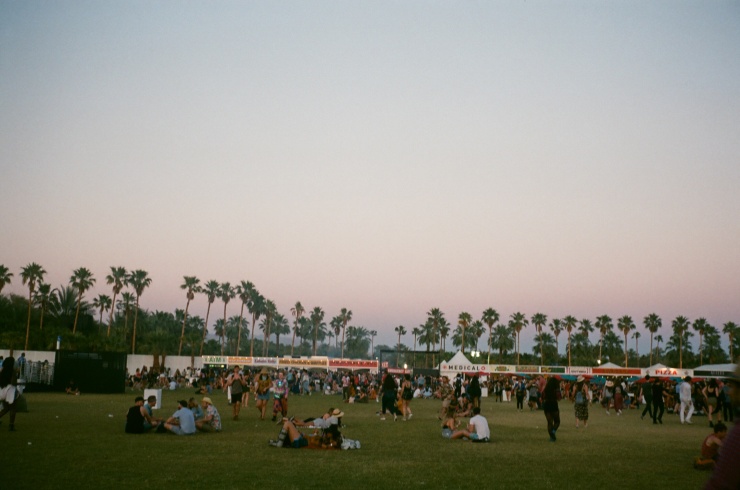 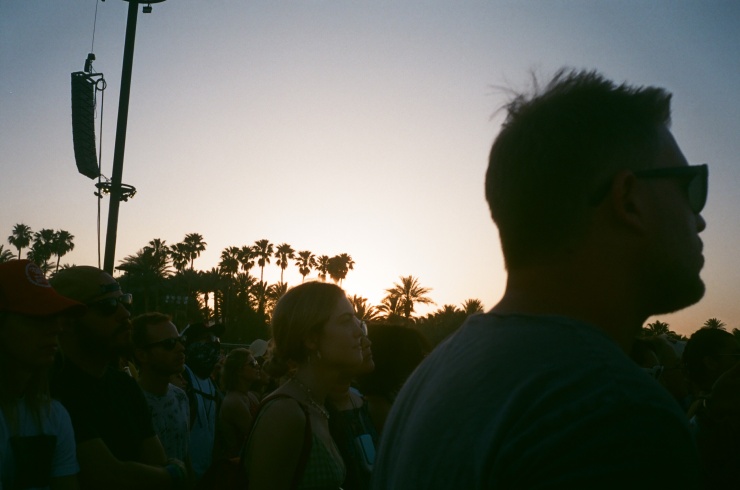 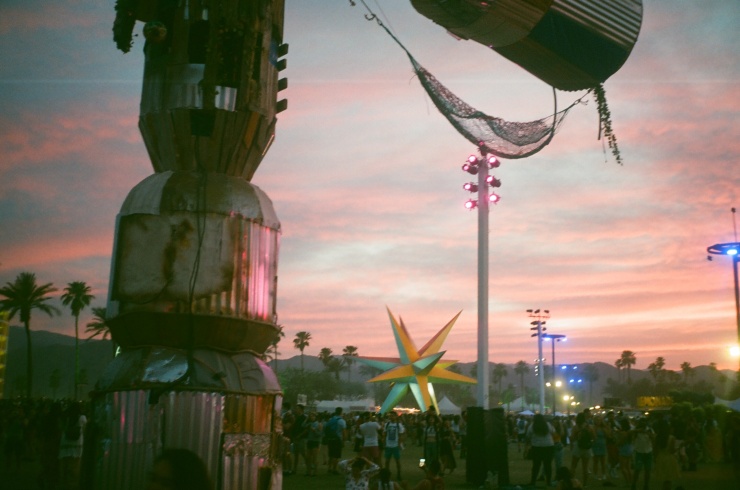 I loved the rainbow of colors from the art. As the sky grew darker the art got brighter and I loved exploring it all. 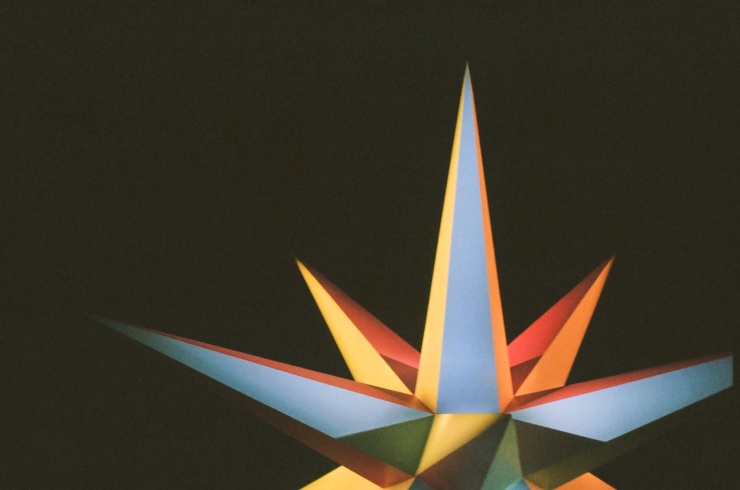 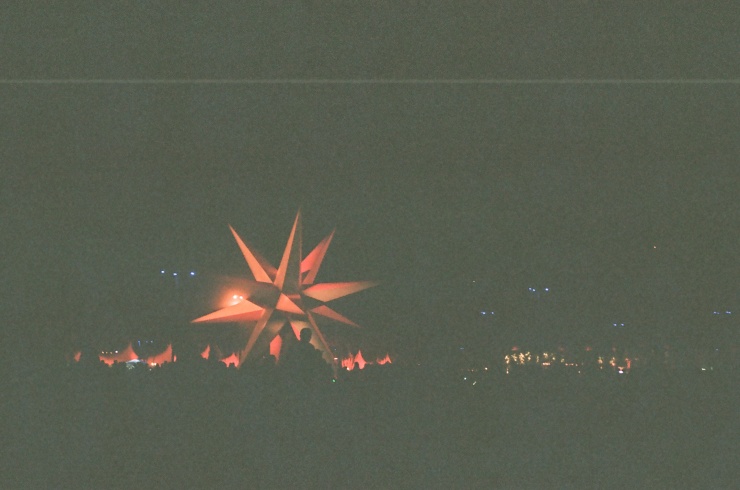 Thank you to everyone who brought their positive energy to the festival. I feel recharged and so happy. Until we meet again Coachella xx

All photos were shot by Shayla Lee using an Olympus Trip, Fujifilm X-Tra 400, and are unedited.